Black day observed in Bahawalpur here on Sunday to strongly condemned India for occupying Kashmir and subjugating people of Kashmir of violence.

Black day observed in Bahawalpur here on Sunday to strongly condemned India for occupying Kashmir and subjugating people of Kashmir of violence.

Rallies were taken out in several areas of Bahawalpur in protest against Indian occupation in Kashmir and victimizing people of occupied Kashmir of prolonged lockdown and violence.

A rally was taken out from Deputy Commissioner Bahawalpur Office. The rally led by Additional Deputy Commissioner Ehsan Ullah Jamali and other officials marched on city roads and reached GPO Chowk. The participants of the rally had held banners and placards inscribed with slogans against India.

Addressing the rally, the Additional Deputy Commissioner and other officials said that India had made eight million people as prisoners in occupied Kashmir. “Eight million Kashmiris have been forced to face worst living conditions due to prolonged lockdown that was continuous for last three months,” they said.

Addressing the rally, the speakers said that credit went to the incumbent government for raising Kashmir issue before the world. “Now, international community has been paying special attention towards Kashmir issue as the US and other countries had termed Kashmir, a disputed area,” they said. They said that there was hope that Kashmiris would get freedom from India soon.

The rally led by Deputy Commissioner, Bahawalnagar, Shoaib Khan Jadoon was staged that stared from DC Bahawalnagar Office and culminated at Minchanabad Chowk. Addressing the participants, the DC Bahawalnagar said that people of Kashmir had been facing acute shortage of food, medicines and water due to prolonged lockdown in occupied Kashmir. He said that Pakistani nation had been fully supporting their brethren and sisters in Kashmir. “India will face defeat over Kashmir issue at international platform and people of occupied Kashmir would get freedom from India soon,” he said. 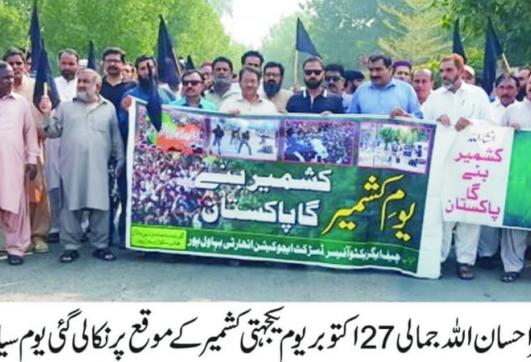